Skip to Main Content
It looks like you're using Internet Explorer 11 or older. This website works best with modern browsers such as the latest versions of Chrome, Firefox, Safari, and Edge. If you continue with this browser, you may see unexpected results.

This guide will help you find some resources relevant to your assignments on Aboriginal and Torres Strait Islander studies and issues.

With thanks to the Indigenous Australia website for this information about the Australian flag. The Aboriginal flag is a symbol of Aboriginal pride and history.

"The Aboriginal flag was designed by Harold Thomas in 1971. It is divided into two equal halves. The top is black, the bottom is red and there is a yellow circle in the centre. The black half symbolises Aboriginal people past, present and future. The yellow circle is the sun, the giver and re-newer of life. The red half of the flag is the earth. It also represents red ochre symbolising spiritual attachment to the land. It was the 30th anniversary of the flag's creation in 2001.

The flag was first flown at Victoria Square in Adelaide on National Aboriginies day July 12th 1971, it was later used at the Tent Embassy in Canberra in 1972, when Aboriginal people were seeking national justice, including land rights, education, legal rights and health. Today the flag is used by all Aboriginal groups and is flown at Aboriginal centres all over Australia." 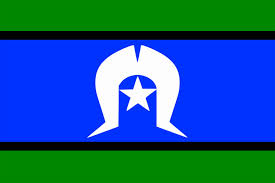 It was the winning entry from a design competition held as part of a Cultural Revival Workshop, organised by The Islands Co-ordinating Council in January 1992. The flag was recognised by the Aboriginal and Torres Strait Islander Commission in June 1992 and given equal prominence with the Aboriginal flag.

In July 1995, it was recognised by the Australian Government as an official 'Flag of Australia' under the Flags Act 1953."